Summary: A mosaic-8 nanoparticle vaccine candidate, designed and developed by Pamela Bjorkman and her Caltech research group, can elicit broad immune responses and protection against COVID-19-causing variants and other related coronaviruses in multiple animal models. These new results were published in the journal Science on July 5, 2022. A key finding is that the mosaic-8 vaccine generates immune responses to many SARS family viruses that were not part of the vaccine itself, including new variants that arose after the vaccine was designed. The results of the current preclinical animal validation study, which builds on protein structure research and an initial proof-of-concept vaccine study, have now led to a first-in-human trial program.

A grand challenge. Developing and translating a new class of vaccine is a multistep process that typically takes a decade or more. Yet there is an urgent worldwide need for a vaccine that will effectively protect us against all known and future variants of SARS-CoV-2, the virus that causes COVID-19, as well as related coronaviruses that may cross over from animal hosts into humans in the future.

"SARS-CoV-2 has proven itself capable of making new variants that prolong the global COVID-19 pandemic," says study leader Pamela Bjorkman, David Baltimore Professor of Biology and Biological Engineering and Merkin Institute Professor. "In addition, the fact that three betacoronaviruses—SARS-CoV, MERS-CoV, and SARS-CoV-2—have spilled over into humans from animal reservoirs in the last 20 years illustrates the need for making broadly protective vaccines. We can't predict which virus or viruses, among the vast numbers in animals, will evolve in the future to infect humans to cause another epidemic or pandemic."

To meet these scientific and engineering challenges in a timely way Bjorkman and her group had to quickly marshal emerging knowledge from the wider community and their own work on the structure of the SARS-CoV-2 virus receptor, meld it with their theory about how one might achieve a very broad immune response, create a detailed molecular design, prototype it, and validate the design in animal models. Successful completion of all those steps would be needed to bring an effective and safe candidate vaccine to human trials.

Step 1 – Theory and proof-of-concept. The program to design and prototype a broadly protective, all-in-one vaccine was launched early in the pandemic with Merkin Institute support. Bjorkman and then-graduate student Alex Cohen (PhD '21) elected to array specific pieces of eight different SARS-like betacoronaviruses on a protein nanoparticle structure as illustrated below. The viral protein piece they used is the receptor binding domain (RBD) of the spike protein, which is critical for coronaviruses to enter human or animal cells. The RBD is also the part of the spike protein that most antibodies lock onto to block infection.

Some parts of the RBDs differ from one strain to another, and those same regions also accumulate new differences by mutation as the virus evolves (these more variable domains are schematized as the multi-colored parts of RBDs in the image of mosaic-8 shown below). By contrast, SARS family RBDs also have regions that are similar from one virus to another, and they have accumulated few mutations during the pandemic (shown by the shared gold color regions). Bjorkman and colleagues designed their vaccine candidate to focus the immune system's attention on these shared regions with the goal of generating immunity to all sarbecoviruses and variants. The concept was based on NIH-funded basic science studies from their lab and others that mapped the physical structure of RBDs. They integrated that knowledge with their understanding of the way antibody-producing cells of the immune system can be stimulated by a vaccine. That, together with some additional technical considerations, led them to use a specific nanoparticle structure (see below) and to specify loading it with 8 different RBDs rather than some substantially smaller number. Results of their first proof-of-concept experiments for mosaic-8 were part of Cohen's Caltech PhD thesis and were published in the journal Science on January 12, 2021 (link). This encouraging first study showed that this mosaic nanoparticle can generate antibodies effective against several viruses whose RBDs were not part of the vaccine as well as those that were.

The nanoparticle scaffold. The part of the mosaic-8 vaccine technology that permanently attaches pieces of a virus to protein nanoparticles was developed initially by collaborators at the University of Oxford. The basis of the technology is a tiny, cage-like structure (a "nanoparticle") made up of proteins engineered to have "sticky" appendages on its surface, upon which researchers can attach tagged viral proteins. These nanoparticles can be prepared to display pieces of one virus only (the "homotypic" nanoparticles) or pieces of several different viruses ("mosaic" nanoparticles). This particular nanoparticle fit the vaccine design concept nicely because of the favorable spacing and geometry it provides for displaying the ~60 RBDs that randomly attach to each particle. 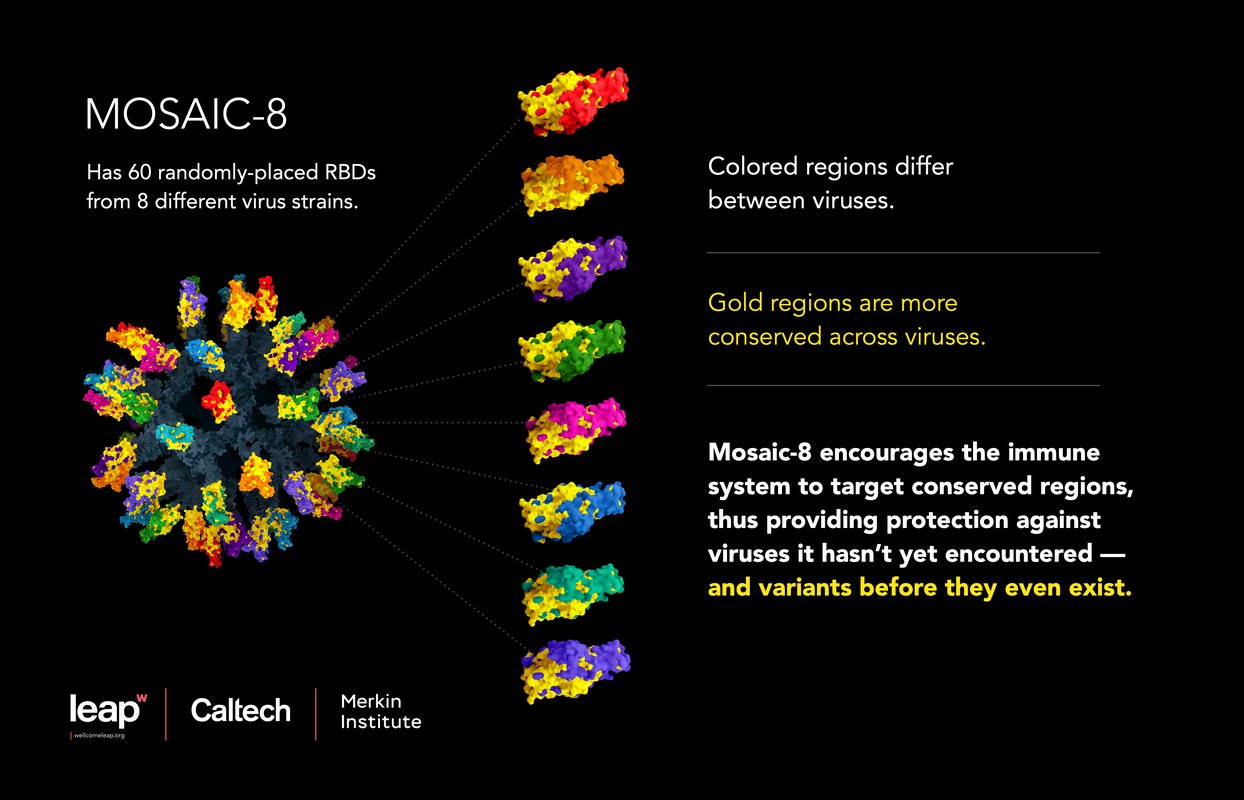 Step 2 - Preclinical validation. In the current more extensive validation study, Cohen and the team used the same set of eight different SARS-like betacoronaviruses shown in the table below—including SARS-CoV-2. This new work, made possible by support from Wellcome Leap, tested and established the mosaic-8 vaccine's ability to stimulate immune responses to many more viral strains using both mice and non-human primate subjects. The results of these validation studies, published in the journal Science on July 5, 2022 (link), are a critical gating step for going forward into human trials, manufacture, and regulatory approval. The essence of the results is summarized in the figure and table below. Notice the extensive set of immune responses to viruses that were not part of the nanoparticle vaccine.

"Animals vaccinated with the mosaic RBD nanoparticles elicited antibodies that recognized virtually every SARS-like betacoronavirus strain we evaluated to a similar degree," says study co-first author Cohen, now a Caltech postdoctoral scholar research associate. "Some of these viruses could be related to the strain that causes the next SARS-like betacoronavirus outbreak, so what we really want would be something that targets this entre group of viruses. We believe we have that."

Testing the theory. To pursue the mechanisms behind the vaccine response the team also collaborated with Jesse Bloom (Caltech PhD '07) at the Fred Hutchinson Cancer Research Center. They mapped the regions of RBDs targeted by the immune responses, and showed that as intended, the antibodies elicited by the mosaic-8 nanoparticle preferentially targeted the common conserved elements of the RBDs. This is consistent with the design theory and predicts that other new variants of SARS-CoV-2 or animal SARS-like betacoronaviruses that could one day spill over into humans will be protected against by Mosaic-8. By contrast, homotypic SARS-CoV-2 nanoparticle injections elicited antibodies against mainly strain-specific RBD regions, suggesting that these types of vaccines will likely protect against SARS-CoV-2 but not against newly arising variants or potential emerging animal viruses. 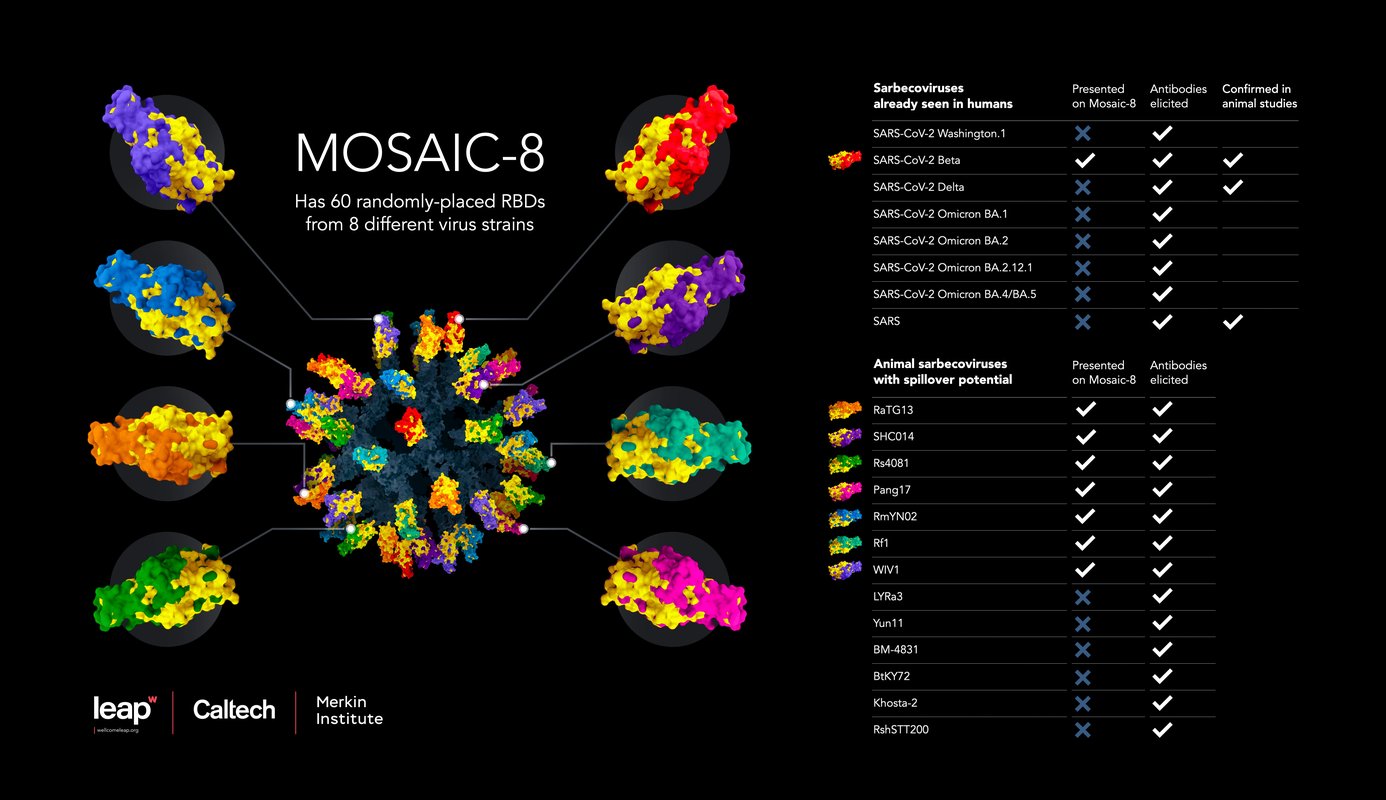 Step 3 – Manufacture and first human trials. Results from the new Wellcome Leap-funded study provide a critical body of evidence needed to advance the vaccine to first-in-human trials. As their next step, Bjorkman and colleagues will evaluate mosaic-8 nanoparticle immunizations in humans in a Phase 1 clinical trial supported by the Coalition for Epidemic Preparedness Innovations (CEPI) and announced on July 5. The trial will largely enroll people who have been vaccinated and/or previously infected with SARS-CoV-2. To mount the trial, Bjorkman formed an international collaboration with manufacturing by the UK-based CPI to advance vaccine production based on the Caltech and Oxford scientific foundation. The vaccine will be manufactured using microbes engineered by Ingenza Ltd. Leading the scientific program of this consortium, Bjorkman is planning preclinical animal model experiments to mimic the current situation in humans in which most people will have already been vaccinated with a licensed COVID-19 vaccine: i.e., compare immune responses in vaccinated animals to responses in animals that are immunologically naïve with respect to a COVID-19 vaccination or SARS-CoV-2 infection. The announcement and a description of the clinical trial to be funded by CEPI can be found here.

Translating with speed and agility. Research challenges and inefficiencies from working under COVID restrictions were not the only obstacles the team had to overcome on the road to today's publication and human trial announcement. Although large amounts of emergency federal funding were made available in 2020 to advance vaccines already in the works at several pharmaceutical companies, resources for riskier more forward-looking designs like Bjorkman's were limited and mainly on a much slower timeline. Her team was able to forge a different and speedier path, jumpstarted by Caltech Merkin Institute support for the initial study and followed seamlessly by Wellcome Leap support for the validation studies in mice and nonhuman primates. Together, this accelerated and coordinated support model, which involved logistics support as well as funding, reduced the timeline to reach a human trial by two to three years. In particular, it allowed Bjorkman to assemble her new human trial consortium in time to enter and win large-scale CEPI support (up to US$30M) needed to bring this vaccine to the clinic.